Latin Origins: the Latin adjective rugosus (“wrinkled”), which itself derives from “ruga” (“wrinkle”)

Distribution: Indo West Pacific Region. In Japan this species is recorded from Chichijima and Anijima Islands in Bonin Islands, Anami-Obshima, Okinoerabujima and Yoronjima Islands in the Amami Islands and from each island of Okinawa Prefecture except Kitadaitojima Island. Very abundunt in Oknawa Prefecture. [1] Central Indonesia – Celebes ( Sulawesi ) Island, West Nusa Tenggara Islands, and the Philippines. Madagascar[3], Maldives. They may also available in the eastern Indonesia ( Moluccas Island & around Papua )[2]

Habitat: tropical shore. Semi-desert water edge in SW Madagascar [3]  The range of Coenobita species is higher up the shore than that of any other hermit crab, but the study species, particularly C. rugosus and C. pseudorugosus, differ little in habitat and zone occupation (Barnes 1997a). Hermit crabs are typically scavenging omnivorous detritivores with little or no obvious partitioning of food resources (Hazlett 1981). The coenobitid species studied are, likewise, highly opportunistic consumers of detritus on the strandline and similar food (Barnes 1997b). Food is, therefore, highly unlikely to be significant in reducing niche overlap.[4]

Characteristics: Pseudo rugosus is pink as juvenile and become dark red/dark pink/a part black when it matures. Eye stalks are elongated. Large pincer is flat on the bottom, stitch marks are less pronounced than on rugosus. The coloration of the large pincer is lacking the two distinct dark patches that is found on rugosus. The shield has a dark brown band behind the eyes.

Ocular acicle broad basally, triangular and terminating in a small spine. Antennular basal segment with very produced laminar portion proximally and vertical margin of its lamina making an obtuse angle with upper margin of segment; small flagellum of antennule reaching nearly to one-half length of large one. Antennal acicle fused with second segment of its penducle.

In left third leg outer surfaces of dactylus and propodus flat, smooth, and separated from dorsal surface by a well marked longitudinal crest; walking legs except left third leg with setae on lower margin of each sement. In male coaxe of fifth legs of both sides produced ventrally, unequal and aright coxa produced into an elongate tube, always longer than left one; its tube turning to the left and curved ventrally.

What distinguishes Pseudorugosus from rugosus by the following characteristics: In the lower margin of the propodus of the large cheliped is nearly straight for the distal half and the palm is , therefore, not four-cornered in an external form; while the palm of rugosus has an obtuse corner and is thus four-cornered in an external form; the palm of the present species is dark-brownish, lacking a distinct large patch of dark brown on the outer surface, but that of rugosus has a distinct large patch of dark brown.[1] 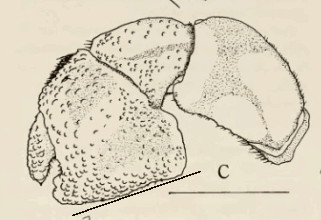 References:
1. Land hermit crabs from the Ryukyus, Japan, with a description of a new species from the Phillippines by Yukio Nakasone