Distribution: West coast of America from Mexico (Lower California) to Chile. Only species definitely known from American West Coast, and restricted to this coast. Records from the Indo-West Pacific are mis-identifications 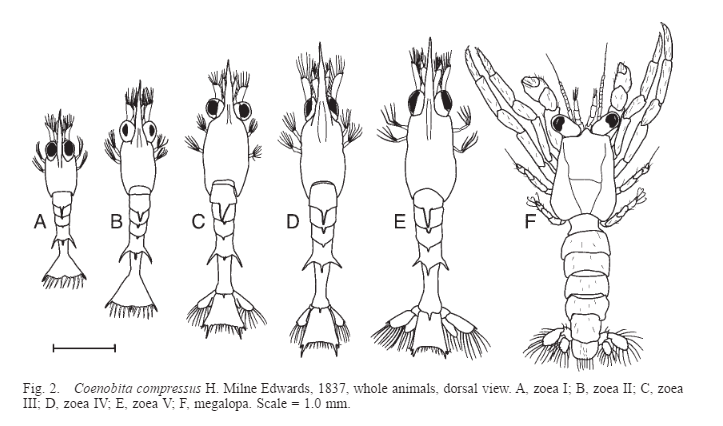 Characteristics: Juvenile compressus are often green or blue and the big pincer is tan. Legs often have dark stripes and the tips will begin to turn tan. As compressus grows its color becomes rich oranges and browns. The big pincer has noticeable stitch marks. They eyes are elongated. Unlike rugosus, there is no black marking on the eye stalk. The eyes are sometimes reddish in color like clypeatus. Behind the antenna on the carapace there is a black diagonal marking.

Behavior:
Compressus are notorious for being very picky about shells as they like a D shaped opening. This is the smallest of the species and does not grow much bigger than a ping pong ball. Compressus is fast no matter which direction they are running and is capable of chirping and seem to do so more readily than other species. Several hermit crab owners have noted this species has a specific molting difficulty which causes them to become trapped in their exo, unable to fully shed and therefore dying.
Ovigerous females often hide during the day, only becoming active at night. Small sized compressus are much more sensitive to desiccation than larger animals and great aggregations can be found under ledges and in caves where there is slightly more moisture.[2]

Males *may* grow considerably larger than the females. (This is based only on the observations of this one study) [2]

Natural History: Coenobita compressus are the most active at night, and in arid areas their activities are almost exclusively nocturnal. Activity usually begins in the evening shortly before sunset. About dawn the Coenobita begin seeking shelter and during the day great aggregations can be frequently be found under the leges, in small rocky caves, under logs and driftwood or dug into the sand. In humid vegetated areas many crabs remain active during the day; this being especially true of the smaller animals. At Bahia Tenancatita, Mexico many Coenobita were active in a moist shaded area near a lagoon during the day and then spread out onto the beach at night. [2]

Since shells, especially large ones, are scarce in many of the areas inhabited by Coenobita it seems likely that many of the shells now occupied by a hermit crabs have been passed around within the population over a period of many years. In this connection it is interesting to note that the majority of the shells occupied by Coenobita seem to be missing the columella. A similar observation has been made by Kinosita and Okajima on the shells of the Nerita striata occupied by Coenobita rugosus from Japan. These authors attribute the absence of the a columella to the chemical effects and mechanical abrasion by the abdominal appendages. [2]

Coenobita appear to do a great deal of apparently “aimless” exploring and I several times found them climbing in trees or bushes with no apparent goal. [2]